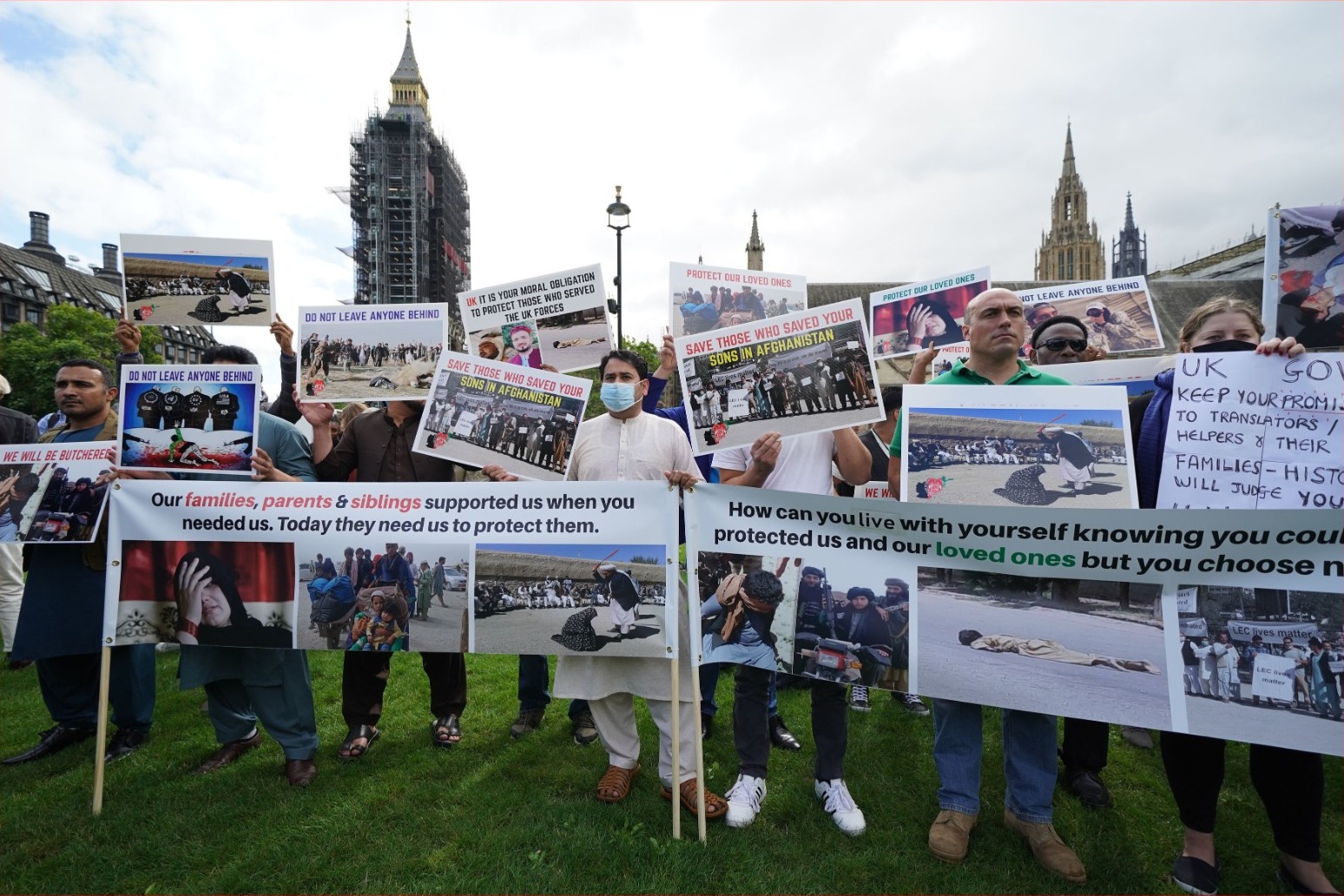 Dozens are out protesting

Dozens of demonstrators have gathered at Parliament Square to protest over how the Government has handled supporting citizens in Afghanistan after the Taliban launched a takeover of the country.

The protesters, who are former translators for the British Army, held banners and signs up in front of Parliament on Wednesday as MPs returned to the House of Commons after it was recalled.

Signs they held included images of people gravely injured in Afghanistan, with the caption “Protect our loved ones”.

One former interpreter, who only gave his name as Rafi, told the PA news agency: “Today we are representing all those employees of the British Government in Afghanistan who have served the British forces.

“Today, their lives are at a very high risk, them and their families, and our families, they need protection and safety.

“The Taliban will butcher every single one of them if they are left behind.

“The Afghan nation feels betrayed and let down. They deserved better. The Americans took the rug from under our feet and left the nation with no protection, no safety and under the control of the same terrorists that we started fighting 20 years ago.”

Dozens more people joined the Afghan translators in Parliament Square in the afternoon, leading to a crowd of around 200 people.

Women and children came bearing posters, red balloons and flags of Afghanistan painted on their cheeks.

Others brought flags and waved them in the air while chanting “free Afghanistan” and “we want women’s rights.”

They were also joined by people from Iran and Iraq who showed solidarity for the people in Afghanistan.

Dewa, an activist who is originally from Jalalabad, Afghanistan, but moved to the UK two years ago, told PA: “We came down here for the solidarity of our sisters and brothers in Afghanistan. We want to tell them they are not alone, we will do everything we can as British citizens to change the situation for Afghanistan.

“This is horrible. This is chaos. They handed over our safe and stable nation to the group they called terrorists for 20 years.”

She said she is concerned about her family members, including her cousins and her aunts, who are still in Afghanistan.

“The girls, the women, the young boys, they’re so scared to go out on to the street. Everyone is trying to find a way to escape the country,” she added.

A small scuffle broke out between one of the protesters and a member of the public who began chastising them for protesting at the same time as Gurkhas.

No-one was arrested and no-one was injured.

The campaign group was there demanding that politicians recognise that the war in Afghanistan was a catastrophe and must not be repeated.

Former Labour leader Jeremy Corbyn attended the protest, as did his brother Piers, although the pair appeared at different points.

Jeremy Corbyn, an Independent MP, tweeted: “Joined @STWuk and other campaigners outside Parliament this morning to demand support for Afghan refugees and no more disastrous wars.”

Meanwhile, Gurkhas staged a separate protest in the same area.

They are calling for equal pensions for Gurkhas who retired before 1997 but are not eligible for a full UK armed forces pension.

Mujtaba, who was an interpreter from 2005 to 2010 in Afghanistan for the British armed forces, said he felt he had a lucky escape as he managed to move his family to the UK a month before the takeover.

Mujtaba, who only gave his first name as he still has two brothers in Afghanistan, described how he moved to the UK in 2010 after his job finished with the British Army but was granted settlement for his family last month.

He told the PA news agency: “I said to my parents, my family, my friends that I am the luckiest person that I came out of Afghanistan with my family and my children.

“The situation in Afghanistan is not good. Lots of our family, friends and colleagues have been left behind.

“When I see everything going on, it makes me sad. I’m sad for them all. But it’s not just me – everyone around the world is worried about the situation in Afghanistan.

“My colleagues, my friends, my two brothers who worked for eight years for the British armed forces in Helmand province and they’ve been left behind.”

He told PA: “I’m here because I support these guys and what they’re trying to do to get a better resettlement policy for Afghan interpreters. I always try to come down and see what they’re doing.”

Discussing the Government’s handling of the situation in Afghanistan, he said: “It was dreadful for a long time.

“Many people here have been trying to change the policy for seven years. Now we’re changing it, we’re getting there, but I hope it’s not too late and we can bring home as many people as we possibly can.”

Around 30 protestors later moved to the Carriage Gates outside Parliament and chanted “Free Afghanistan” while waving flags.

They have joined the Afghan interpreter protesters and are also calling for the British Government to help with the political problems the nation is facing.

Labour MP Navendu Mishra came outside and spoke to them around 15 minutes later.

The backbench MP, who was elected in 2019, said he was hoping he would be able to speak during the debate later on.

He told PA: “I wanted to hear what they had to say. It’s important to understand what these people are going through.

“I think the British Government has done too little, too late. They need to do a lot more. I think there needs to be a proper plan to support the country going forward. People here have very strong feelings about recognising Taliban as the official government. Obviously, there are lots of terrible things happening in Afghanistan at the moment.” 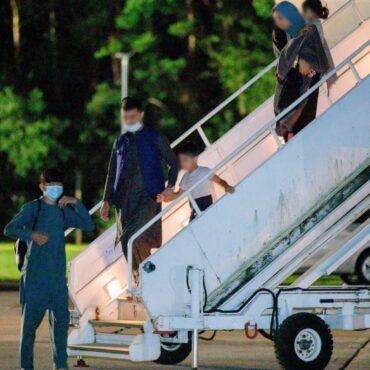 They've said they'll get at least 1000 people in flights out of the country each day. Officials are working to speed up the operation to get remaining UK nationals and their local allies out of Afghanistan, Britain’s ambassador to Kabul has said. Sir Laurie Bristow said they would put “everything we can” into the mission in the coming days amid fears that time for people to leave may be running […]